“A shorter than normal race season for me and with lots of other far more important stuff happening than pedaling push bikes round in circles meant that I fancied a little challenge ride before the British weather turned to shit again. I have looked at the Ridgeway double a bit but I came across Mtb Epics UK who are a couple of guys (Vince and Matt) that put on some fairly low key but well thought out events.

On their list was the Lands End to Bristol Mtb Adventure which looked cool but I’m more of a ‘one day get a good night kip and refuel’ kind of guy rather than a multi day slogger so I spotted the ‘Smoke Ring Challenge’ which they ran last year as a 3 day event. Just under 200 miles around the outer edge of London with a ferry crossing in the middle looked pretty fun. Obviously it would be a mix of on and off-road and making use of cycle paths. We sorted out a date and the guys kindly offered to support in tow and set about a plan to meet up every 20 or so miles so I could travel light and hopefully fast.

I booked us in a cheap hotel just off the M4 but unfortunately I hadn’t quite spotted it was literally underneath the Heathrow flight path so it was a bit noisy! Still we had time for a quick beer and pre ride planning before an early night to try and set off at 6am the next morning. I had a plane to catch from Manchester the next day so a good incentive to get a move on and get round in a decent time. 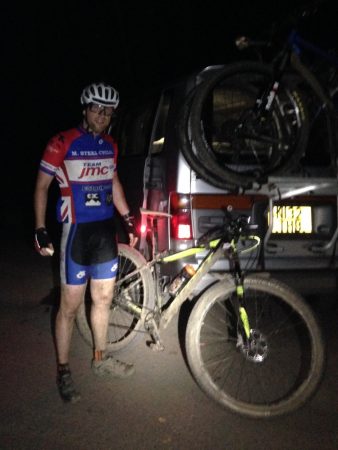 Setting off in the dark for the first bit felt a bit odd but soon daylight rose as I motored on through the posh bits of Eton & Windsor and through lovely parkland. It was pretty flat here so we got off to a good start.

Flying along the mix of cycle network tracks and bridleways I continued on at a lick until a cut in the tyre slowed me down a bit but it was soon repaired with a stabby stick and I had a spare bike that I swapped to at the next meet up point just in case. 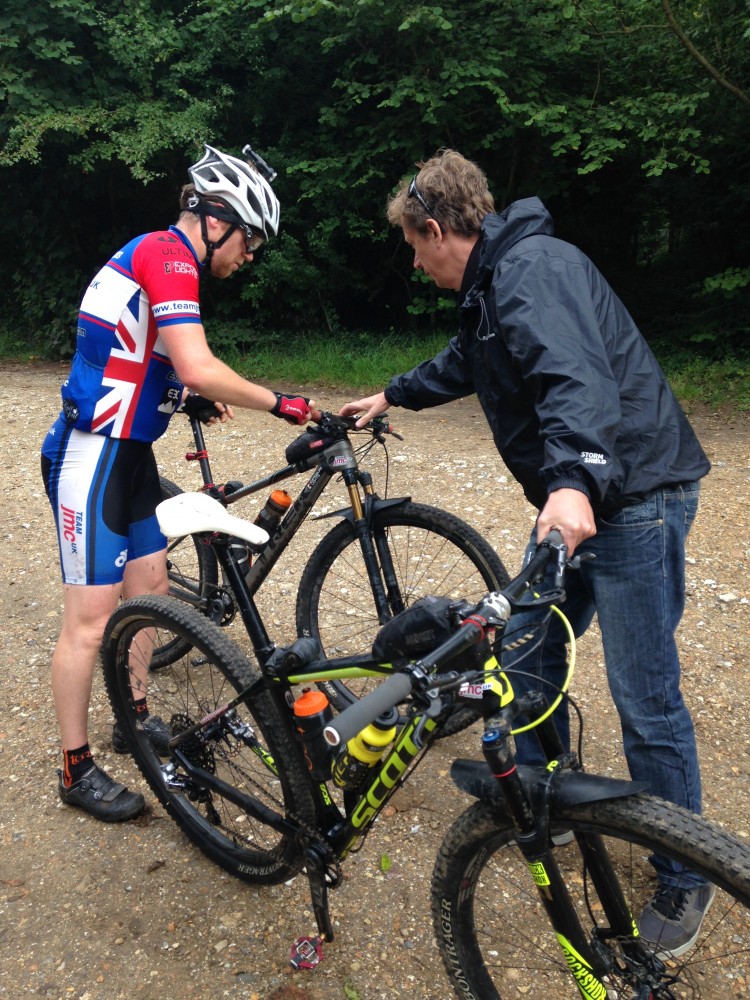 The weather was pretty grand for a change and despite the rains of late the trails were pretty dry. The route took in a decent chunk of the built trails in Swinley Forest and despite some recent trail closures, some last minute work by Tristan at Swinley Bike Hub meant the diversion was easy to follow. I had pumped my tyres up to about 30psi so they were a bit sketchy in the woods but faster on the roads. I got a bit carried away and shot down a section of swoopy red route and before I knew it my garmin was bleeping saying I’d gone the wrong way. Oh well, I hacked back on a short fire-road and was on the line again in no time. A friend, Lynne, had come to cheer me on and it was nice to see a familiar face around the woods as we rode together for a short section. 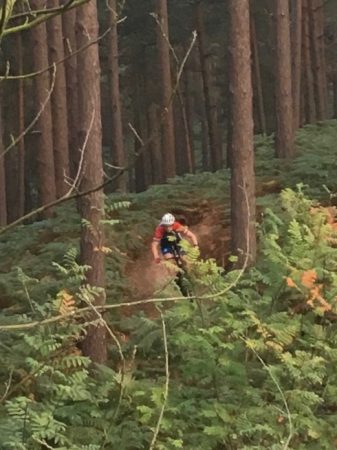 Heading across the Surrey Hills was the toughest bit of the route and where a lot of the climbing was. Some pretty steep hacks were followed by some lovely wooded twisting descents. I met up with Vince at the highest point in the area – Leith Hill Tower, where I had begun to start feeling a bit tired and the initial adrenaline had worn off.

There was a little cafe up there but I had a plane to catch so we pushed on. It was nice to ride with him and guide me through some of the more twisted wooded sections and we even came across a burnt out motor that someone had somehow ragged down a purpose built singletrack trail!  Box Hill was a highlight and I got chatting to a roadie who was firstly alarmed I was keeping up with him, secondly that I’d already been riding for a few hours and thirdly that I was doing quite a few hours more! I eventually saved his embarrassment and let him drag away to the top.

The terrain softened and I was making good time to the ferry. There were some busy road sections which I just took as time trails to get them done with. Riding a loop round one of the world’s largest cities is inevitably going to coincide with vehicles but I had my Exposure Lights day bright set-up going to keep me nice and visible on the roads. The new Reakt rear light even has a thing where it changed pattern according to what you’re doing so flares when you brake! 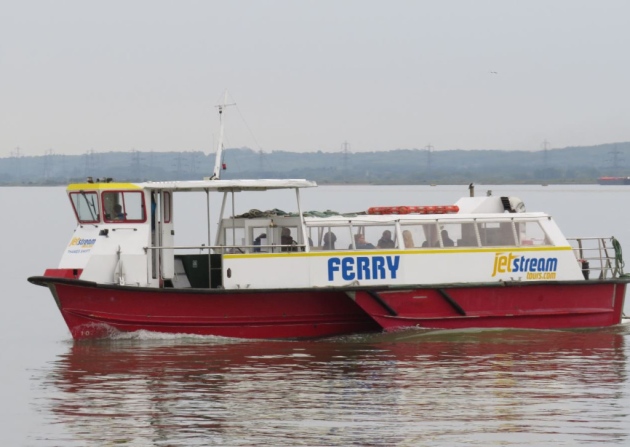 My legs were feeling it a bit as I closed in on the Gravesend passenger ferry where I had a 25 minute wait with Vince which I used to shovel a load of Torq energy bars down me to recharge. I think it was the near constant pedaling that was causing the fatigue as the rolling terrain didn’t allow for much respite. You’d also be nailing along a flat section for a while then a climb would pop up and you’d realise you’d been riding at threshold for a long stretch so when a different effort level was required it was pretty hard to adjust for some reason so I was finding myself winching up slowly.

The northern section of the route was much easier and I gradually built the average speed back up nearer to 12mph that I had lost on the ferry crossing. Regular meet ups with the boys meant I was well fed and watered and not being in a race scenario meant I had a bit more digestion time that was a nice change. Some Muller rice was about as much solidity as I had all day. I’m so tuned to energy products now I find I don’t really need much else. I think the boys were expecting me to stop for a sandwich at some point and looked a bit surprised to see me basically just grabbing stuff on the go at our meet up points.

Surprisingly for a route so close to the Big Smoke there was a lot of scenery and only occasionally did you cross a major road so it often felt a lot more isolated than it was. Sweeping through Epping Forest felt like we’d broken the back of it and some fast flat roads and canals meant I could tap out the miles. The Colne Valley park went on for ages as darkness fell. A couple of rain showers came and went but I was pretty wet from the day’s exertions anyway so it all just blended in to one big sweaty mess.

With the end in sight the pizzas were ordered and a long fast blast along the canal meant with a bit more effort than I would have liked 15 hours in, I was able to sneak under the 16 hour mark with actual riding time a mere 15 hours 55 minutes. But not before the obligatory chav abuse at the road side “look at you with your F**ing lights, you w***ker” I laughed as he stood there swaying with tinny in hand.
I rode pretty much the exact route with only a couple of minor diversions where my Garmin didn’t pick up in time before I headed down a different trail but every time I was able to follow my nose and pop back on to the gps line.

The route is most suited to a cx bike or a short travel hardtail with nothing majorly technical. Don’t think that doesn’t make it hard though as I’ve never done as many pedal strokes in a long ride before and my average heart rate was pretty high so it was a big effort! As you’d expect there are road sections and long sections of cycle network but so long as you aren’t expecting endless singletrack then you won’t be disappointed on this epic day out. Next year the guys are running the event over 2 days which will be a great challenge ride.
Massive thanks to the MTB Epics UK crew for plotting the route and supporting me on the day. They definitely got an insight in how hard it can be supporting a solo endurance event! I’m sure the purists would go for a self supported adventure and it could easily become an independent time trial route”.